Fashion. Some people put a lot of thought into the clothes they wear while others could hardly care. Here is a look at the style of dress and fashion sense each of the 16 MBTI personality types is likely to display. END_OF_DOCUMENT_TOKEN_TO_BE_REPLACED

[dropcap]W[/dropcap]estern standards of beauty clearly have the most influence and prestige around the world. Aspects like leaness, well-proportioned bone structure, healthy hair, and physical fitness are some of the features coveted in western culture. The pinnacles of beauty are often personified in Hollywood’s leading actors and actresses, haute couture fashion models, and even certain high profile athletes. In other parts of the world however, there are other standards of beauty that exist that would seem bizarre or unthinkable to westerners. Here are 10 ideas of beauty valued in certain parts of the world.

In the west, people pay good money to have their teeth straightened. In Japan however, many Japanese pay hundreds to undergo surgical procedures to have their teeth made crooked. The look is known as “yaeba” and is meant to resemble the awkward teeth of young girls whose chompers haven’t fully developed yet. Yaeba features teeth that look crowded with vampire-like elongations of the canines. It is said that Japanese men find the yaeba smile attractive because it makes women look impish and endearingly child-like. Women inspired by national pop stars and celebrities flock to have the cosmetic dental procedure done which involves attaching permanent or non-permanent adhesive fang caps to their canines. “Yaeba” literally means ‘multilayered’ or ‘double’ tooth. Physicians have admitted that some clients return to have their procedure reversed, however. Fortunately the removable-type of “tsuke-yaeba” is also available so that clients don’t have to live with their decision should they change their minds later.

In the Mursi tribe of southern Ehiopia, women are encouraged to wear lip plates which are wooden discs inserted into a gaping hole cut into their lower lip that is expanded gradually over time. The Mursi women often begin this process around the age of 15 or 16 whereby their mother or some other appointed woman cuts a slit in the lower lip which is held open with a wooden plug until the wound heals. Over a period of months to years the plugs are replaced with larger plugs until the desired size is reached. Some have stretched their lips to hold discs of 12 centimeters or more. It appears that the Mursi females are not coerced into doing this but choose to of their own volition sometimes under the influence of peer pressure. The lip plate is supposedly a measure of a woman’s bridewealth however, some reports have claimed the lip piercing may be a remnant of a custom meant as a deterent to make the Mursi women less attractive to slave traders in the past. Others happily marry without having pierced their lips or wait till after they’ve had children to do so. 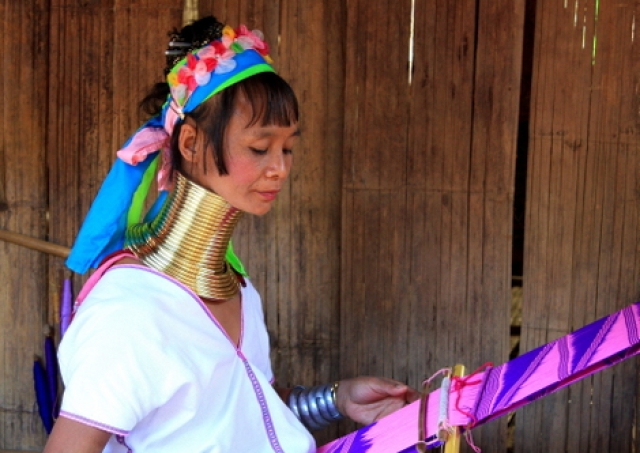 In Burma, a long giraffe neck is a thing of beauty. The Kayan women of eastern Burma wear weighted brass coils that compress the muscles around their collarbones pushing them down into their ribs to make their necks appear longer. More and more rings are added over time and a full set can weigh up to 10 kilos. Although the rings can be removed, most women tend not to due to discomfort and skin discoloration. Also because having worn them so long, the rings feel like a part of their body and they’ve expressed feeling vulnerable and naked when not wearing them. Possible reasons as to why this practice originated may have been as protection against tiger bites or to deter slave traders from taking the women as slaves. The women that continue to wear neck rings have cited doing so to preserve and uphold the beauty of their culture and possibly support their local economy by attracting tourism.

Even in western culture, a curvy, buxom figure is well appreciated but in Mauritania this ideal is taken to a greater extreme. Mauritania, a north African country twice the size of Texas, has suffered ongoing problems particularly in the form of food shortages and chronic poverty. It is little wonder then, why plumpness would be valued as a symbol of status and prestige. In 2009, Mint Ely, head of the Association of Women Heads of Households stated in an article “In Mauritania, a woman’s size indicates the amount of space she occupies in her husband’s heart”.Women in Mauritania are encouraged to fatten up and parents often force their daughters to gorge on pounded millet, camel’s milk and prunes. They are punished if they resist and if they vomit, they are forced to eat their puke. The practice is said to have originated in pre-colonial times where wealthy white moors expected their wives to sit all day while black servants tended to household duties. The men wanted their wives to emulate those of the prophet muhammad and poetry has been written in praise of stretch marks.

In the Surma tribe of Ethiopia’s Omo valley, men and women adorn themselves with body art in the form of keloid scar designs. The practice also serves as a test of strength and maturity for young women to signal their suitability for motherhood and childbearing. The ceremony involves the use of razor blades and thorns. The skin is pulled using the thorn and then slit with the blade, afterwards agitating the wound and filling it with plant juices, and charcoal to enhance the scars formation. The intricate scar patterns are seen as beautiful and more preferable to that of their natural smooth skin which they consider to be ‘ugly’. During the 10 minute ritual, those who undergo it do their best to maintain a stoic face and not to show pain or fear so as not to bring shame on their families. Tribe members have received ridicule from urban Ethiopians who view them as primitives. Many try to conceal the markings of their tribe to avoid negative stigmas against them when among the modern Ethiopian population.

The Maori are a Polynesian tribe in New Zealand. The Maori decorate their bodies with intricate tattoos as a mark of adulthood and achievement. They do it also to accentuate their features and beautify themselves to attract romantic partners. It is a custom that has been carried on for centuries and was observed by the earliest European settlers and missionaries who were both fascinated and appalled by the Maori’s ink covered skin. The men may receive tattoos that cover much of their face and throat like a mask. The Maori women are restricted to more moderate decoration and have been known to favor tattoo designs on their chin purportedly because it draws attention to the eyes and lips. The process of applying ink is also a test of strength because the method used by the Maori is particularly painful, more so than modern methods. They use sharp scalpels to scrape and carve into the skin to inlay ink beneath the skin to create a work of art that will remain permanently.

In Iran, cosmetic surgery is popular among young women seeking to enhance their physical attractiveness. According to some figures, up to 40,000 cosmetic procedures are done in Iran each year. In particular, nose jobs are a popular procedure and now even the wearing of nose bandages following a surgical procedure has become fashionable. Women proudly wear them as a signal to others that there is a beautiful butterfly developing beneath their gauze-wrapped cocoon. But even with no surgery, many women will fake having had a nose job and voluntarily wear the bandages as a mere hipster-like affectation. For them, the implication of the bandages alone is almost as satisfying as actually having a nose procedure. In Bali, sharpened teeth are considered a form of both physical and spiritual beauty. From July to August, teeth filing ceremonies take place as a rite of passage for adolescents into adulthood. It is usually done when a boy or girl reaches puberty, specifically when a girl has her first menses and when a boy’s voice starts to change. The day before the ceremony, the young adult is required to remain indoors in isolation so as to protect them from opportunistic evil spirits and such. To file the teeth, a priest carries out the task using a file, hammer and carver all of which have been purified with holy water prior to the procedure. The ceremony is typically held between 4 AM and 6 AM and when it is over, the incumbent is considered to be a mature adult. According to Balinese historical records, the teeth filing ritual has been conducted for over 2000 years.

The ideal of femininity in ancient China would have been a podiatrist’s nightmare. For a long time in China, having tiny feet that could fit into footwear the size of doll shoes was considered a symbol of status and beauty. Women who had the means and money, underwent the painful process of foot binding to shape their tootsies into little deformed flippers. To achieve this look, the toes  and arch are broken and bound tightly with silk ribbons. The wrappings were removed periodically for cleaning to prevent infection. Girls were forced to walk long distances to help expedite the process of breaking down their foot bones as the bindings became progressively tighter.  After about 2 years, the process was complete resulting in a thoroughly crushed, hoof-like foot that made men go gaga. Feet that were 3 inches long were lauded as “golden lotus”, 4 inchers were “silver lotus” and a 5 inch foot was a clunky “iron lotus”. Foot binding is said to have originated some time in the 10th Century by a dancer named Yao Niang after she charmed the socks of a powerful Chinese emperor. By the 1930s, the fad thankfully fell out of vogue.

Women in the Himba tribe of Namibia are known for their iconic red skin and hair. This is not a genetic feature but rather a result of their unusual beauty regimen. Twice a day they apply a ruddy, aromatic paste called otjze made from crushed ochre stone, fat and butter all over their skin and hair. They begin doing this as soon as they are old enough to look after themselves hygienically. The origins of the treatment is not certain but it appears to carry benefits as a sun block and insect repellent and also helps to retain moisture in the skin. Because water is scarce, Himba women cleanse themselves with herb-infused smoke which they allow to permeate their skin for minutes at a time. Women’s hair feature intricately styled braids and dreadlocks and they wear jewelry made from shells, copper and woven reed.